Imagine floating high above land and sea on a bed of clouds, silently sweeping by on a billowing breeze. 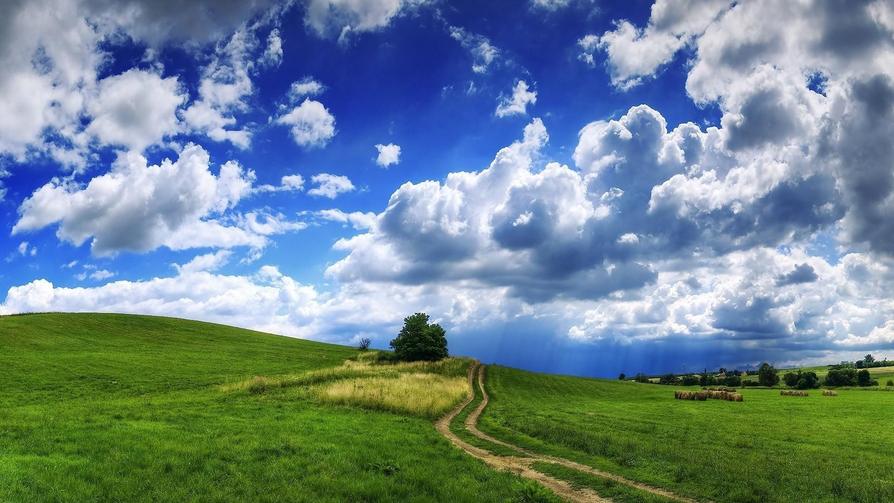 Back down to earth, let's take a walk outdoors. But what should we wear? Wellington boots? A sun hat? Maybe a warm coat? How do we know what the weather will be like today? 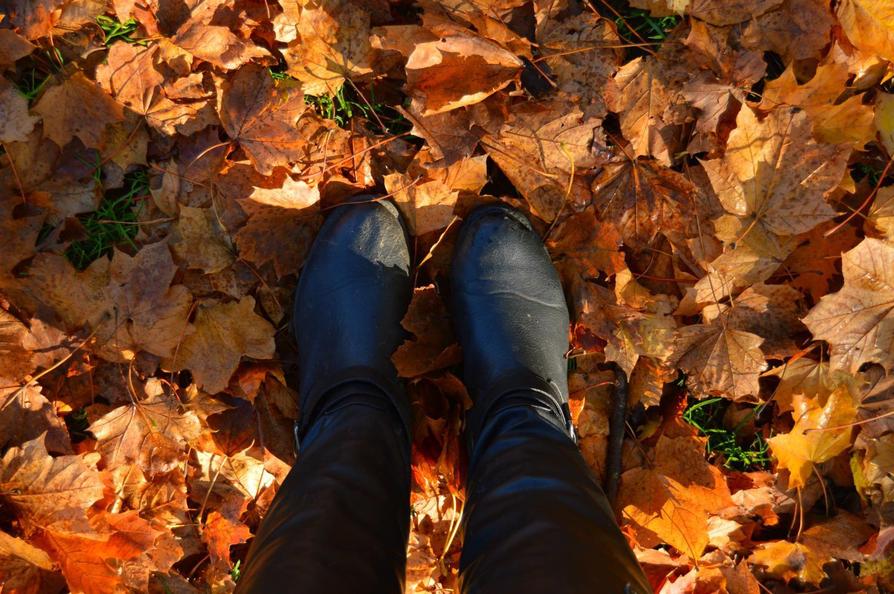 What weather do you prefer? Sunshine, snow, storms or showers? Get your wellies on - let's go! 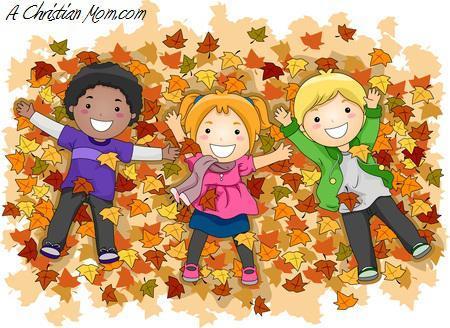 We have had a very busy and fun week! First, we made our own kites!

We followed step-by-step instructions and we helped our friends, when they needed help. Then, we flew our kites! Before we flew our kites, we talked about what weather we needed, in order to fly a kite. Unfortunately, there was no wind! But we came up with a solution of running around to create wind. We looked outside of the window and we discussed what clothing we needed. We decided to wear our coats because it was cold. When we went outside, we ran around the playground and flew our kites. After that, we wrote a recount about what we done because Miss Powell forgot what we had done. We sorted pictures to remind ourselves what we had done. In Maths, we learnt all about shapes! For the first two lessons we focused on 2D shapes! On the first lesson, we read a story called 'Square Bear: A Fairytale of Polygons'. We found out that the same shape can be different sizes and angles. We made our own fairy tale character but we were only allowed to use one shape! On the second lesson, we discussed the properties of 2D shapes and then we had 2 minutes to find as many flat shapes as possible! We then used the shapes we found and sorted them into different groups. Some of use grouped them by colour, name, corners, number of sides and/ or size. The next two lessons, we focused on 3D shapes. On the first lesson, we learnt the names of a variety of 3D shapes. Although, we struggled to pronounce 'sphere' and we kept saying 'Sofia' but we are now experts on saying sphere. We linked the 3D shapes to real life objects and we came up with lots of different examples. After that, we worked in groups an we took turns to feel a 3D shape and described it to our group. Our friends then had to guess which 3D shape we were describing. On the second lesson, we read the story 'Make a Wish, Albert!' This story was about Albert's birthday presents and how they looked like 3D shapes! Albert had his birthday party at school and he left some presents at school. We were very nosy and we wanted to find out what Albert got but it was rude to open someone else's presents, so we had to guess what he could have gotten. We apologise for not adding anything about last week but we were so busy having lots of fun learning, that we forgot! The most exciting thing happened this week! We had a letter from the BBC asking us to go on TV and become weather forecasters because their weather forecaster was feeling under the weather. We were so excited to be on TV but before we did, we needed to learn about what a weather forecast is and we needed to learn to vocabulary of what to say. First, we had to identify weather symbols and describe them, using adjectives. Afterwards we composed sentences, using time adverbials and adjectives to describe the weather. We then added conjunctions to join sentences together. We had a discussion about what Art is and most of us thought that is was painting, drawing, cutting and sticking, so we focussed on Andy Goldsworthy's Art because he created sculptures and pictures out of natural materials. We looked at a range of his art work and identified which materials he used. He used a range of stone, clay, sticks and even Cow Manuere! We decided that we was going to use natural materials to create our own weather or season. We were in groups of 5 and our first job was to find natural materials from outside and inside. Afterwards, we planned what season and weather we were going to create and drew what the image would look like. We then worked as a team to make different seasons.

Can you guess which season/s and weather/s we have used? 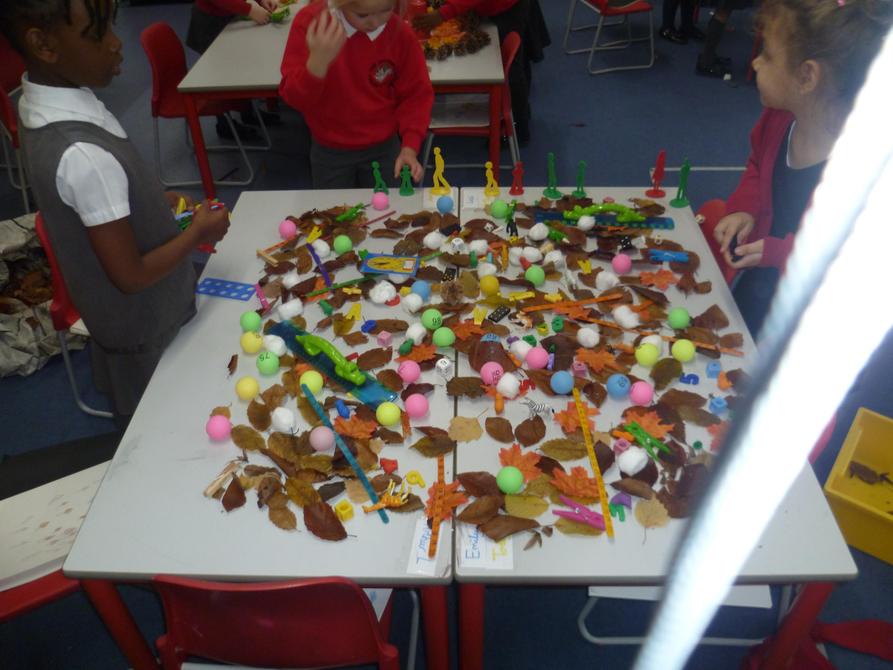 "The people are coming into the park in Autumn" - Anu

"Autumn because the people are lining up" - Carly

"The animals are in school" - Karina

"They are going into the park. They want to see friends and play with snowballs" - Chanri

"We are in the park. The leaves have fallen off the trees and it is Autumn." - Emily 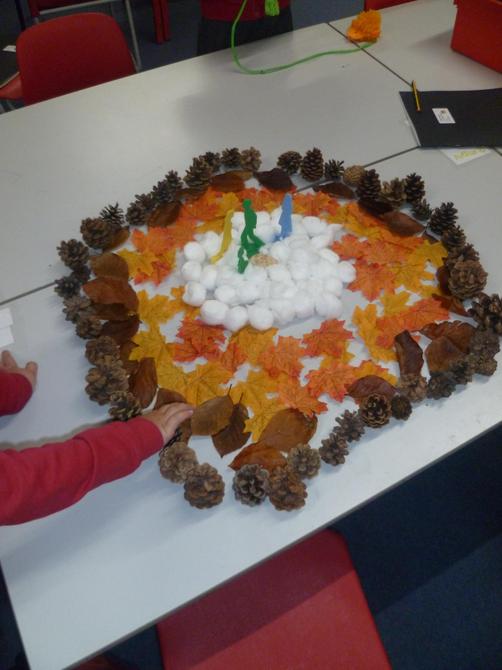 "It is cold and awesome because there's snow." - Poppy

"The leaves and pine cones have fallen off the trees." - Sikemi

"We made a park. It was snowy and windy and hot." - Seren

"We added snow and leaves because it is Winter and Autumn." - Rosie F 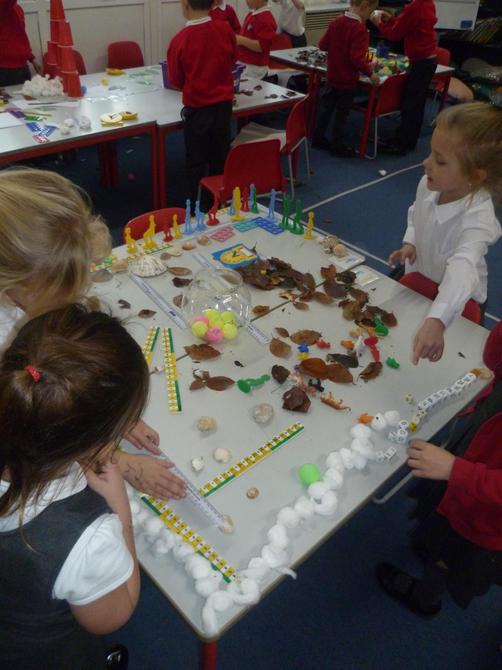 "There are people at the beach. It is Summer." - Toby

"The leaves are Autumn." - Liylah

"Where there is snow, it is cold. Where there are shells, it is hot." - Rosie A

"The leaves have fallen down from the trees. It means that it is Autumn." - Sophie 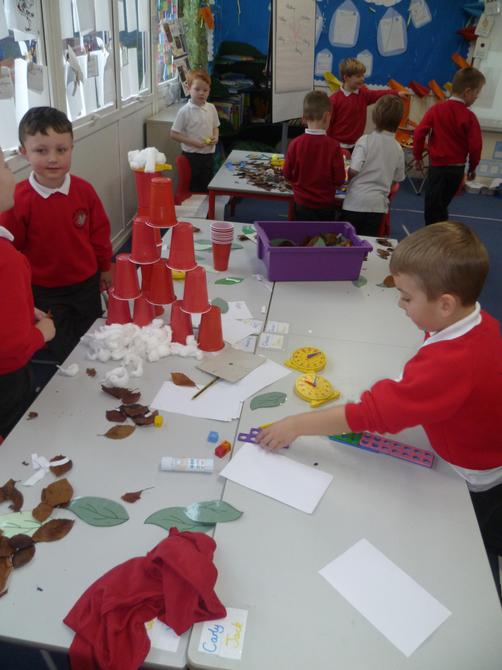 "It is snowing in the City." - Thomas

"Snow and cloud. I made a snowball." - Ffion

"Evaporating into water then turns to cloud and then it snows." - Oliver

"It's snowing from clouds." - Jack 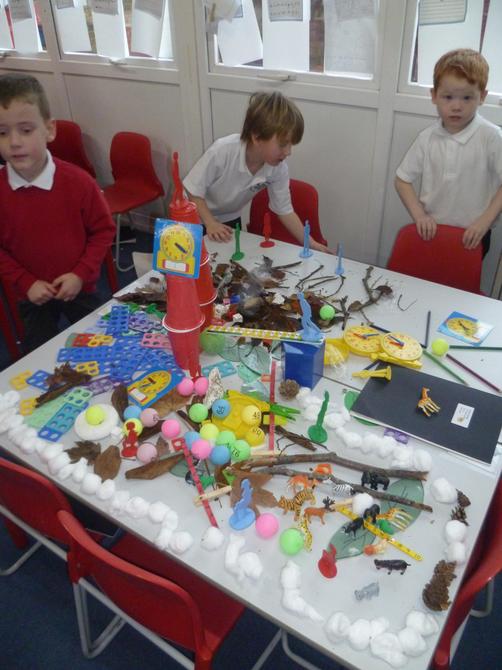 "Over there it is snowing. The animals are cold." - Arthur D

"It is Autumn because of the leaves and sticks." - Arthur L

"By London Eye, it is Spring because the numicon are flowers." - Jamie

As you know, we are having a hamper competition at the school's fete next Wednesday and our theme is Movie Night! We spent part of the afternoon decorating the hamper boxes! Some of use decorated the popcorn holder, some of us decorated the director's frame and the rest of us made popcorn for the popcorn holder! The hampers look amazing! Here are a few pictures of us decorating the hampers: 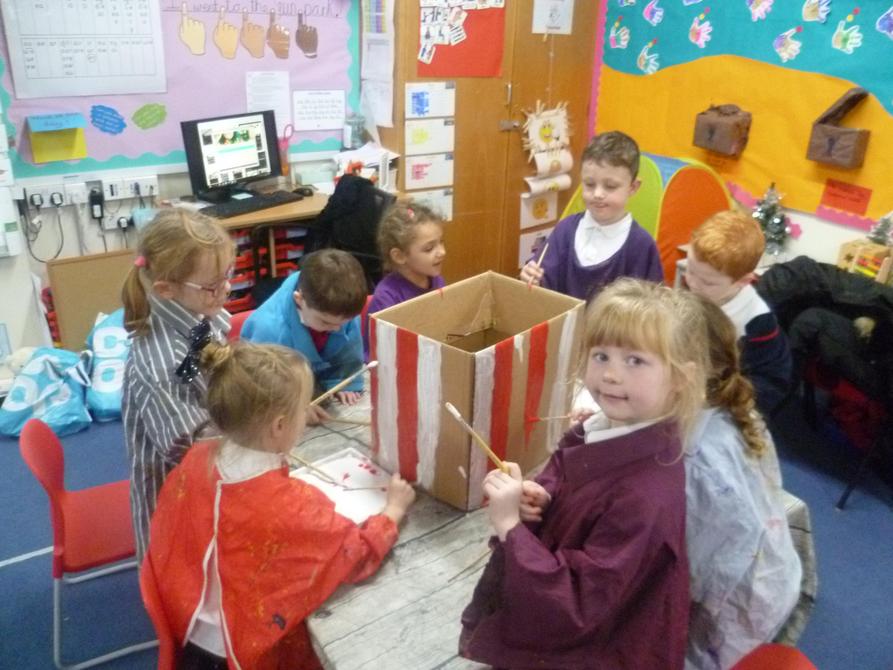 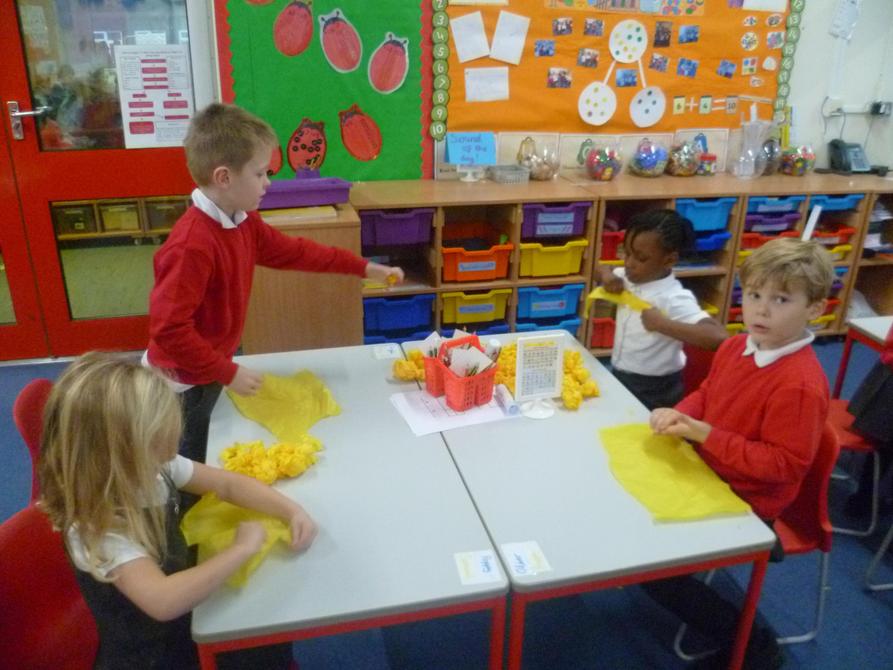 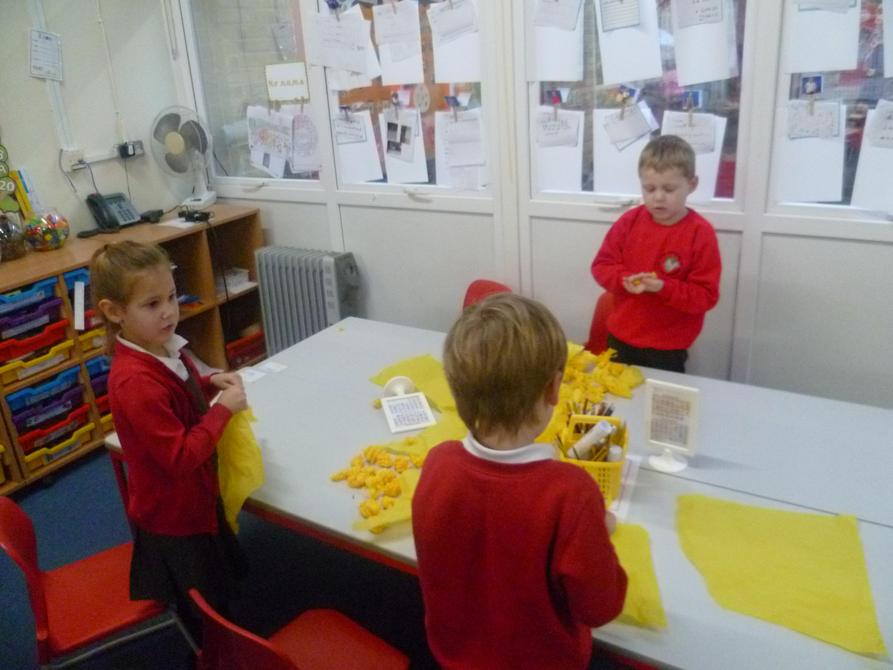 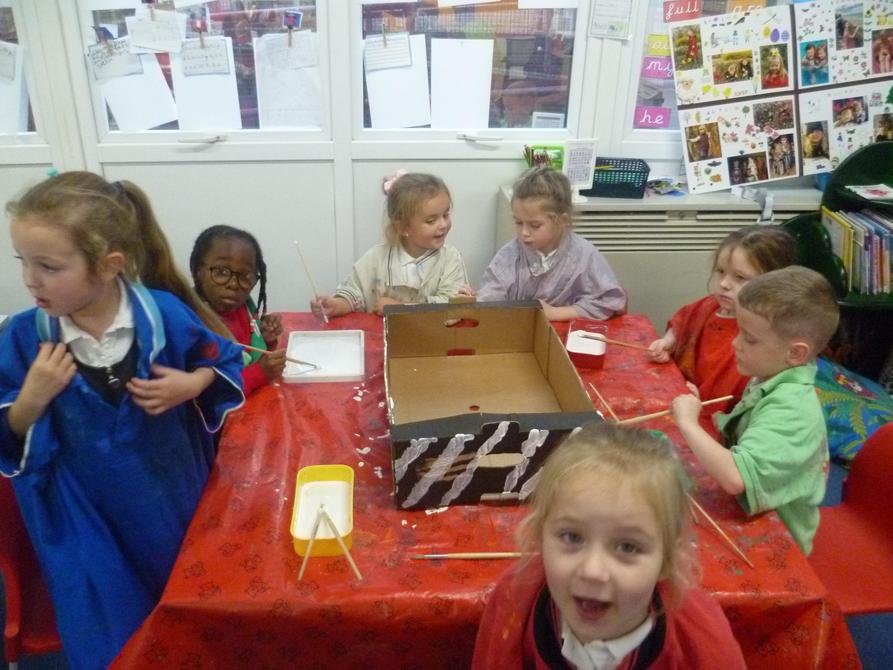 This week, we were so lucky to have the parents in for the afternoon! We had so much fun making Christmas decorations! There was so much to do! Because we are in Pine Class, we made pine cone Christmas Tree decorations and they look absolutely amazing! We also made super-cute snowmen, cool Christmas trees, pretty pictures AND a LONG, GIGANTIC PAPER CHAIN! 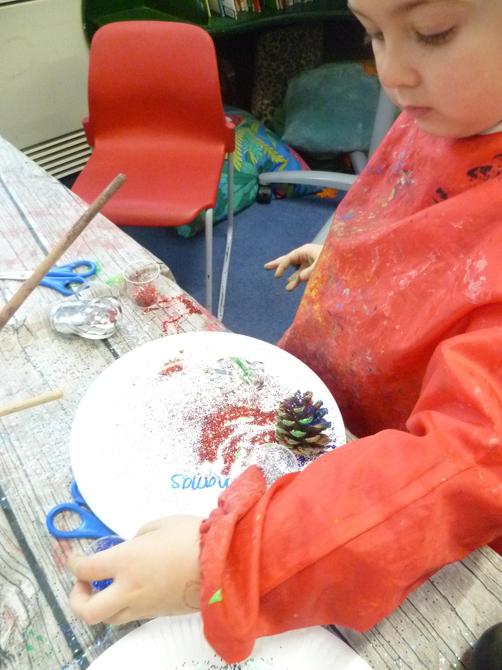 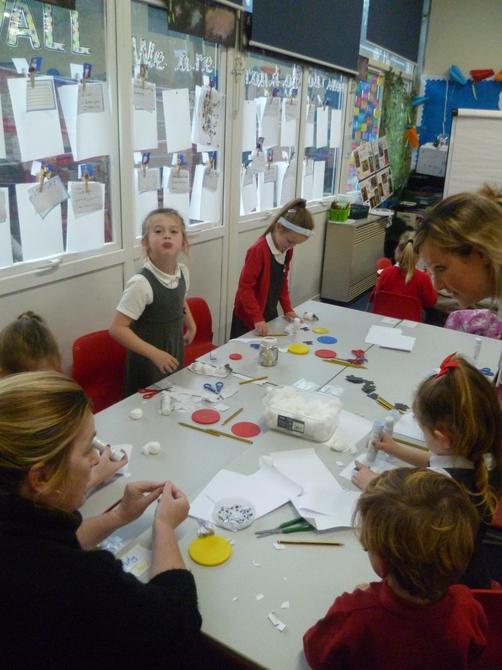 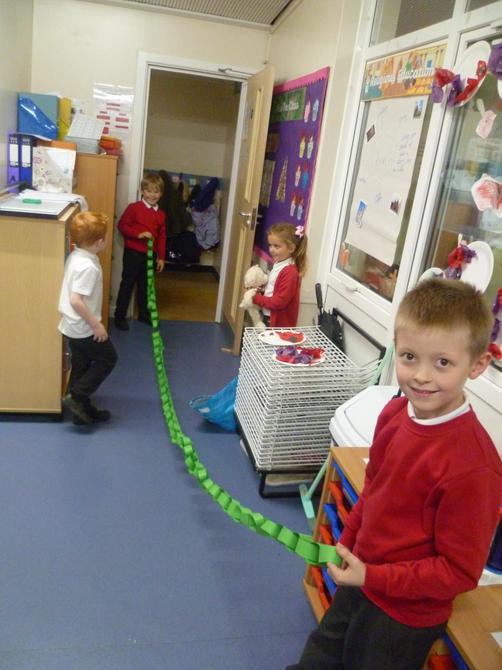 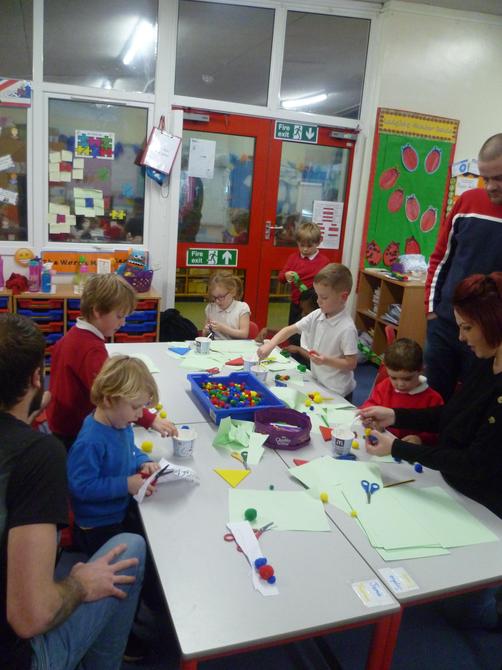 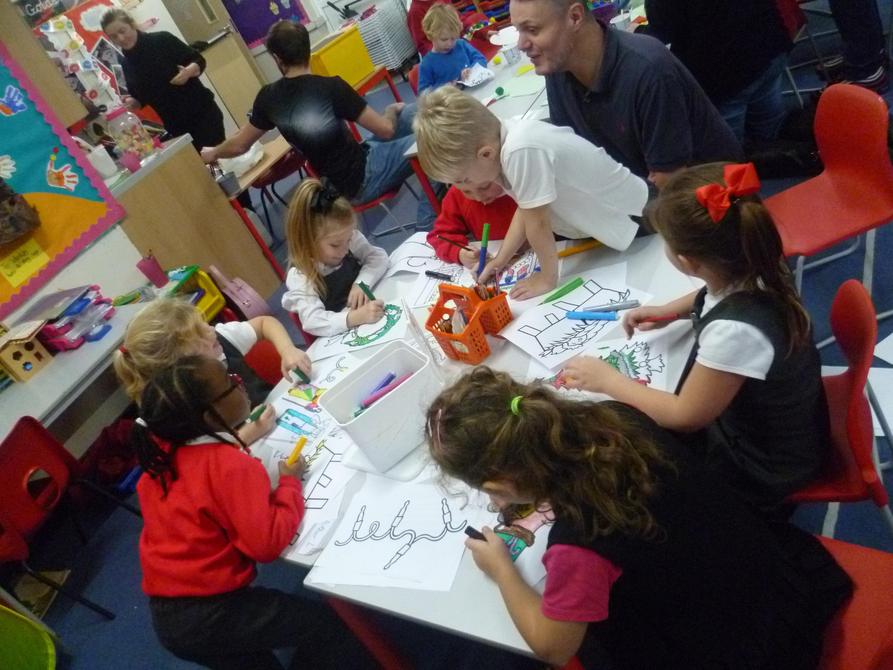